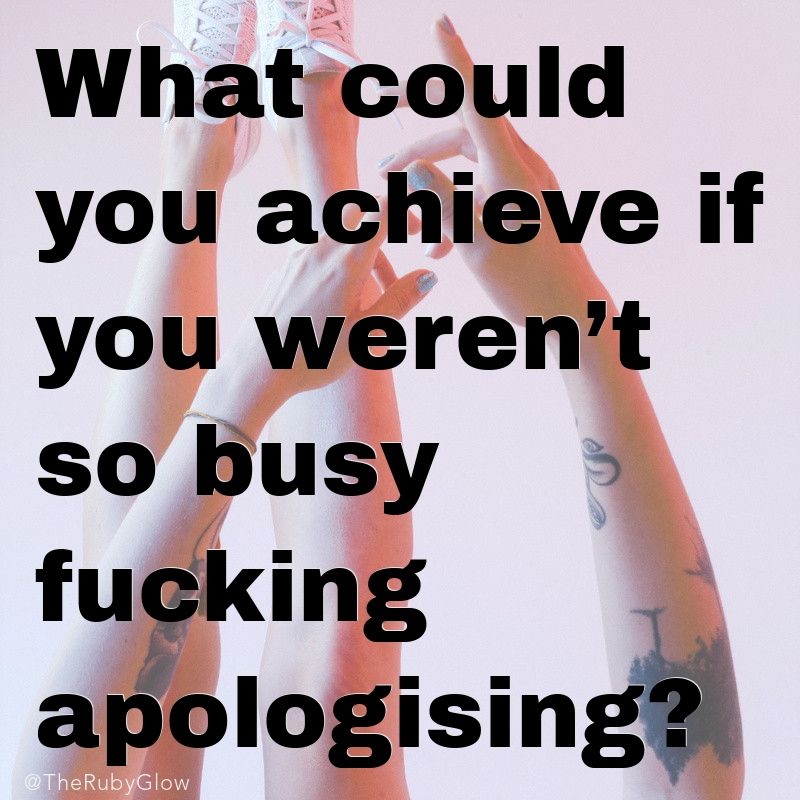 What are you sorry for? What could you achieve if you weren’t so busy fucking apologising?

What are you sorry for? Debbie was sorry all the fucking time. Sorry for being too big, too tall, too loud, too *her*.

Debbie wondered what that must be like. To own everything about your life, own it and have it on full display.

She’d wanted to be an actor, but that was for show offs and well, she certainly didn’t want to be one of *those*.

She wanted to sing in a band. But lead singers were all assholes she’d been told, and Debbie most certainly didn’t want to be seen as an asshole. So she meekly apologised for thinking it and went back to her safe job that paid the rent and made her mother happy.

“It’s good to have security. Now you can save up for a deposit on a nice sensible car.”

Debbie didn’t want a nice sensible car, she wanted a microlight but what the fuck, who flew microlights?

It was only when she met James at the pub one night when she’d been tipsy on cider and a little bit of her bigness slipped out, that she thought maybe she’d been apologising too long.

James had kissed her outside the ladies toilets and told her to wait for him as he went to the gents. She had, while saying sorry to people shuffling past her in the cramped corridor.

He strode towards her, loo door swinging closed slamming to the sound of the hand dryer, and pushed his body close to hers. So close his breath heated her neck. Hairs raised at her nape and his hand pressed between her legs.

“Sorry,” she started, flustered by the space she was taking up, he might be trying to get past.

“What are you sorry for?” he said, kicking her feet apart and pushing his thigh in between hers, jamming his hand into her crotch. It was the weirdest thing. Why would he just do that? It felt good and the words played on her lips as he rubbed slowly back and forth through her jeans.

But no one had ever called her on her sorries before, they’d just accepted them, taken them as if it was all she had to offer. I’m sorry. What that’s it? The sum total of her life was a fucking sorry?

And like that, with a semi-stranger’s leg and hand pressed at her cunt, she suddenly realised she wasn’t fucking sorry. And here’s the thing—in that moment, knew she’d never been fucking sorry.

She’d never been fucking sorry at all.

And with this knowledge she reached up and cupped James’s jaw hard, twisting her fingers to his throat then turned them both around so it was him against the wall and her grinding her cunt up against his hand, tilting his face up to hers. His eyelids sank to half shut, lust dancing on his lips and she leant in and kissed him hard, feasting on his beautiful pouting mouth. He started kneading the denim at her crotch with ferocity now and his other hand snaked up to the back of her neck where he fisted his fingers into her hair, causing a growl to escape.

They were hot, shuddering, desperate, she dragged him into the ladies, into a cubicle, they tripped and slipped and slammed their way into the stall, squeezing shuffling, fighting, wrestling. Tongues entwined, hands tearing tops from waistbands, she just wanted his cock. She released him and made space between them so she could undo his belt and pull him free. The belt slid through his faded black jeans beautifully and the buckle clinked as she snapped it free. Oh yes, she wrapped both hands in the leather strap and bid him take out his cock. He did. She hooked her hands with the belt over his head and pulled him to her for another fierce bout of kissing.

He dragged her zip open and she awkwardly twisted and wriggled as he tugged her jeans off down her hips.

They laughed into each other’s mouths, not wanting to break free. Trying to get her out of the garment, he stood on the crotch when it was at her knees and pushed it to the ground with his boot. Fuck that was hot, her cunt clenched and she hauled her feet through the denim, her shoes coming off entangled in the jeans.

Still they were kissing, still his head locked to hers by the twisted leather at the base of his skull holding him tight.

It was brutal. He speared her with his eager dick, right in, no preamble. It pulled at her cunt walls, wet but still dry enough to cause a delicious drag all the way in. He paused at the hilt, grunted. It was fucking sex.

He broke free of the kiss and dipped into her neck breathing hard into her flesh for a moment or two. Then she tensed her arms on his shoulder, giving him the space he needed to pull out, his dick coated with her slick want, and now it was easy. He fucked her hard over and over pumping her cunt with his stranger’s hard cock. Raw and feral they fucked and her pussy clenched tight, spasms taking over and a deep sensual welling in the pit of her core signalled an orgasm coming from deep within. It was like she was holding his cock with her entire soul, right inside and then, she spiralled down to that one point of existence, somewhere in the ether she could hear them fucking, see it, smell it, feel it, but she was just outside of that…suspended…

Then, slam, she was out, crashing towards them, enveloped in them and with an almighty roar, she came, she came on his cock and into his soul. Connecting and fucking and shuddering they came together slammed up against the stall wall of their sticky damp local pub.

And when finally he lowered her feet to the floor, and they twisted awkwardly to pick up and get back into the discarded clothing, they smiled at each other.

When they were righted again, he looked at her with his eyes wide, and rubbed at his jaw in a way that showed he didn’t quite believe what just happened.

And recognising what he was about to say, Debbie put a hand forcibly over his mouth

“Don’t say it,” she said. She didn’t want him to be sorry. She wasn’t. For the first time in her life she realised she wasn’t sorry at all.

Not one fucking bit.

I’ve been mulling this sentiment over for a while and once again, along comes Marie with a Wicked Wednesday prompt that fires me into action! This week the theme is Apologising.

15 thoughts on “What Are You Sorry For?”