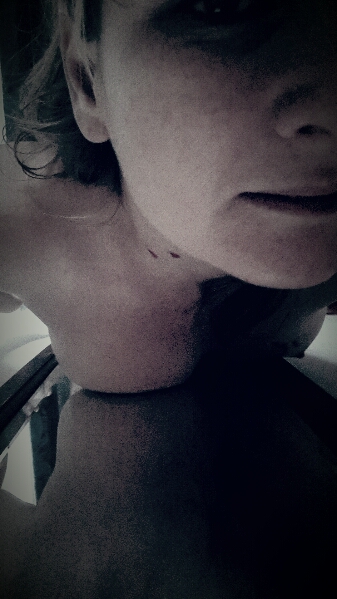 *Blog Update* – delighted to announce that this post made the MM top 3! Thank you Kayla x x x

How Could I Resist?

Tamara ran her tongue around the inside of her mouth to savour the taste of him. She’d tried to stop but the jerking of his hips and surge in his balls gave made her lust for his orgasm and she hadn’t been able to resist. He tasted of everything she knew he would, sweet, salty, sexy. Oh the way he’d grabbed her hair, just right and fucked her face. Perfect.

She pushed him back on the bottom step and dipped to his crotch once more, nuzzling into his softening cock and inhaling the mouth-watering pheromones in his rich curls.

Snuggling there for a moment longer, Tamara practically began to purr when he ran his fingers through her hair and massaged her scalp. She was hungry for his kisses and lifted herself to crawl up his body. She yelped as her ankle made contact with the ground.

He quickly caught her under her arm and pulled her up to him, frowning as he did. “You’re hurt. Let me take a look.”

“It’s fine, just a strain,” she said dismissing him and leaning in to catch his lips. “Kiss me.”

He pushed her away and seemed to turn into Mr abrupt once more. “It could be more than that. Ms Davidson, I’ve witnessed first hand the stubbornness of your nature so I’m afraid you cannot be trusted to assess the damage.” He manoeuvred her on to the step next to her and took her foot, cradling it in his hands and running his fingers over the swelling joint. “It could be broken.”

Tamara rolled her eyes. “It’s certainly not broken,” she said, trying to draw her leg away from him. She wasn’t used to this sort of attention, even if it was slightly offhand, and she felt a little awkward.

His whole body softened and he slumped back into the staircase dragging her on top of him with one hand.

Tamara crawled up and straddled him, taking his lips in hers and sharing the taste of him. His eyes rolled closed and they began to kiss sensuously, slowly and intensely. Tamara’s whole body felt as if it was vibrating with pleasure, or need, or emotion. She wasn’t sure what but it was incredible. She gave herself permission to go with it and found herself grinding her naked wet pussy over his thighs.

He grabbed her ass and pulled her as she clenched and released on him. Her hunger was ferocious and as she humped his leg, her climax mounted.

“Oh god, I’m actually going to come on your leg.” And with that, she the shuddering began and she opened her eyes to see him staring into her.

“Yes, come,” he whispered and she stilled for a moment, gazing at him in that space where souls collide, then broke away as orgasm tore through her body. He still had her ass gripped in his strong fingers as the final twitches subsided and Tamara sunk her teeth into his shoulder. Even now, she was hungry for him and she let her tongue roam over his delicious skin, inhaling and exploring his taste. As she reached his collarbone, he flinched and twisted.

“Stop, it tickles, I really can’t take that,” he said, wriggling softly away and removing his hands from her buttocks. “Come on, let me take a look at that ankle of yours.” He shifted out from under her and picked her up and carried her back through to the kitchen.

If you enjoyed listening to this story, why not try I’ve Got This Fever or I Want My Words to Make You Want

This story is part of a book I’m writing, if you want to buy some longer tales, here’s the link to my books 🙂